This article describes three possible options for ‘Bitcoin HODLERS’ to participate in the network by running a full node. Also, some deeper insight according to this technology.

If you are already familiar with Bitcoin and Blockchain technology then you already know that its fundamentals are a decentralized network of computer nodes. In other words, all nodes are equal and there isn’t a central authority that controls everything. As a result of this, every participant has the possibility to run its own Bitcoin full node.

Many crypto enthusiasts are very charmed by this property and decentralization is the main reason they support this. But if there is not a central party in control, how to keep the network secure, safe and growing?

What is a Bitcoin Full Node?

How many storage space? Currently, the total Blockchain is about 230GB in size and the chart above is indicating linear growth. It’s very safe to say that 2 terabytes of storage size will keep you safe for the next 5 years.

Running a Bitcoin Full Node & Why it is important

Besides Bitcoin nodes, there are also SPV nodes which are different types of nodes. SPV clients are so-called lightweight nodes. These clients validate Bitcoin transactions on the network without the need for downloading the entire Blockchain. So, why are Bitcoin nodes important?

How many Bitcoin nodes are there?

Currently, there are more than 10K Bitcoin nodes on a global scale which makes it’s the no 1 safest Blockchain network in the world.

If you are looking for a way to make a direct profit out of this then I have to disappoint you. Running a Bitcoin full node doesn’t give you an incentive like running masternodes or staking crypto from a wallet. So why should you care?

Bonus Video with Jimmy Song: What is a Bitcoin Full Node 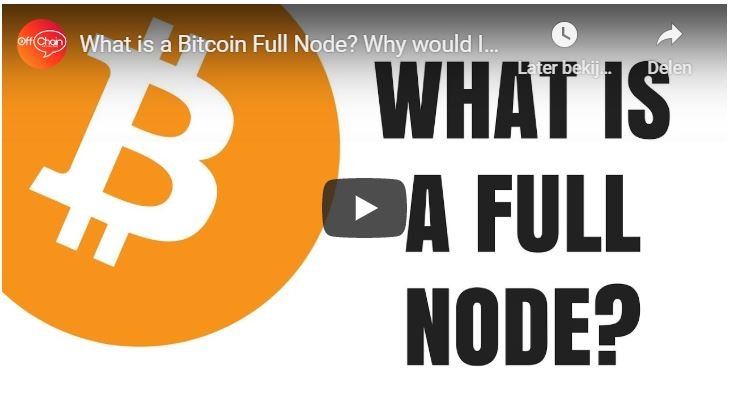 Running a Bitcoin Full Node & What are the options

So now that you know WHAT a Bitcoin full node is and WHY it is so important to let’s dive into the options available. This Blockchain technology is still in its infancy and very easy solutions to participate aren’t there yet. Firstly, I want to give you an indication of what type of configuration is needed for running your own Bitcoin node.

Nowadays it’s very cheap to go to a hosting provider and run a VPS server in the cloud. A VPS stands for Virtual Private Server and is actually a virtual configuration of a PC but it runs in the cloud.

This style of hosting is essentially one physical server, which is then divided into several smaller virtual servers. Each one of these virtual servers acts as its own dedicated server environment.

Since you have your own dedicated section of the server, you have your own set of allocated resources and can customize and configure your server partition exactly the way you want. Plus, there’s no exchange of data or file access between accounts on the VPS server.

Bitcoin node on VPS the costs

This VPS solution is totally up to you and of course, you have to decide what your priorities are. The costs for running a Bitcoin node on VPS will be about 40 – 50 US dollar pro month. Maybe you can get it cheaper and I would advise you to check the following hosting providers:

Option 2: Out of the Box Solution

If you are a Bitcoin believer and want to participate with a node but don’t have the time to configure it yourself this solution would fit you best. Currently, there are several ‘out of the box’ nodes available to buy. The solution provided is a complete hardware box with all the relevant software already installed on it. This ‘Out of the Box ’ node comes with a price of about 300 US dollars, but customer support will be included.

So if you are still interested in spending money on a node and saving you the efforts of setting up everything by yourself, here are the options available to you. Note: This information is for free and I’m not affiliated to any of the products listed below.

If you are technically savvy and like to build things yourself then this is the option for you! Also, it’s the cheapest option compared to the others. As a matter of fact, this solution will cost you about $35 single investment. So, what’s this option all about?

The Raspberry Pi Foundation recently released a new, more powerful model of its single-board computer. The new device will cost $35 a unit and has the capacity to run full nodes cheaply on the Bitcoin network.

Earlier versions of the Raspberry Pi have been popular with Bitcoin enthusiasts and decentralization advocates as it provides a low barrier to entry for those interested in running their own full nodes on the network.

Raspberry PI Bitcoin node allows users to verify their own transactions over the Bitcoin network independently. As a result of this, users don’t have to trust third-party wallets or custodial service providers which makes the network safer. What are the hardware configurations for this?

Running a Bitcoin full node comes with several options nowadays. As a result, users who aren’t that tech-savvy have also possibilities to participate in the popular Bitcoin network with their own node. Of course, this service comes with a price. Although running a Bitcoin node doesn’t incentivize it’s users the amount of running nodes is at record highs(10K+).